I have tried to be consistent with blogging these last few months; at once a week (ish), I think I’ve done a decent job. In spite of these efforts though, life continues to be much fuller than I have given credit here on the Dunehopper Diaries. This post will thus be a hodgepodge of happenings, a medley of experiences, a casserole of thoughts from the last three weeks. It’s a bit long … sorry, but like I said, the time has been full. I begin just after the photo show (see April’s post).

Seeing through fresh eyes:
Three days. Only three weekdays to put house back in order – clean the kitchen, rearrange furniture, sweep and dust, wash the sheets in the guest room, and shop for groceries. My friends Kait and Ryan would arrive Wednesday after school. In fact, with the multiple staff meetings I had scheduled that day, chances were good they would beat me home. They did – thankfully not by much. After the cab dropped them off, they managed to find the house key, their room and the shower – all in enough time for me to find a clean and happy couple when I rolled in.

They stayed a week and got to see the many wonders of Nairobi. Significant, considering this was the first time in Africa for both of them. They explored my neighborhood, bought flowers from a roadside stand, watched the ISK high school band/choir concert, petted baby elephants, fed giraffe, visited Karen Blixen’s house, attended an international church, went on a game drive (animal safari), walked with the animals on Crescent Island, and hiked an extinct volcano. They had a few individual experiences too – Kait (also a music teacher) came to a rehearsal of the Nairobi Chamber Chorus and got to teach one of my classes at school. Ryan got to go with another friend of his to the industrial side of town and see a grittier side of the city. Both were adventurous with food, and so we ate our way around the world. We started easy – Italian on the first night – and from there we branched out to India, Ethiopia, Kenya, and China/Japan. 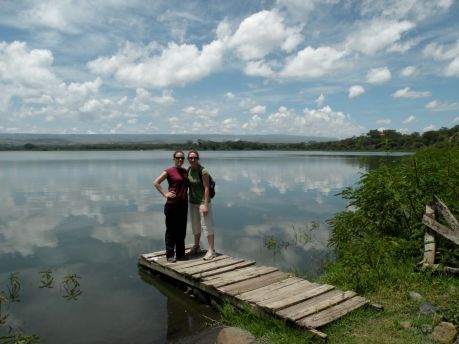 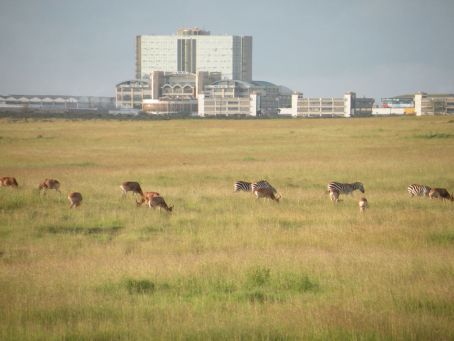 In the week they were here, it made me smile to experience this place through their eyes. I have been on and off this continent since I was two. Whether conscious or unconscious, I have a reference point for many of my experiences – multiple points of comparison which I regularly use as tools to decode new experiences. There are lots of things I don’t bother to think about anymore. This being their first trip to Africa however meant that *everything* was new: sights, sounds, smells, tastes. They had many excellent questions which led to some insightful conversations, which in turn have helped re-open my own eyes to a fresh way of seeing. Delightful.

A little effort, significant rewards:
Kait and Ryan took off at 11pm the following Wednesday night. That gave me two days until the Habitat trip. Two days to tidy up things at home and catch up on school stuff. Two days to organize the details for the build on Saturday. As co-sponsor of the student chapter of Habitat for Humanity, I get the privilege of leading two short build trips – one each semester. While I had known for months that I would be leading a trip on April 24th, my heart still wasn’t in it. A relaxed Saturday at home would be so nice – especially after the hectic couple of weeks I had just finished. Days before the trip, the other co-sponsor and I debated whether or not to cancel.

Jon: “There are only two kids signed up to go so far.”
Me: “And no other teachers have responded to my request for an extra chaperon. It’s such a busy weekend for folks – lots going on.”
Jon: “Do you want to cancel?”
Me: Oh that would be nice … could I really? “Mmm … have others spoken to you individually about it?”
Jon: “A few others have taken forms but I’m not sure how many will bring back their slips. We could set a target – say if the group is less than 10 by Friday we cancel it.”
Me: “Less than 10? Oh … that seems high. I feel like I could still get something accomplished with 7 or 8 kids. Even 5. Let’s say if we don’t get 5 kids, then we’ll cancel.
Jon: “Okay. Will let you know.”

In the end, seven kids came with one other teacher and her two-year old son. We left campus at 7:30am on Saturday morning, drove three hours east of town into the hills of Kamba land – rattled down a dirt road for an hour then walked a narrow path to the build site. As we rounded the corner, a welcome committee burst in to song and dance. Waving hibiscus and other flowers, they came to greet us, pulling us into their circle with happy handshakes. I’ve never been greeted with singing and dancing on a Habitat trip before.

A tent and some plastic chairs had been set up next to a one-room, clay-brick hut. They ushered us into the seats of honour. After a few minutes of welcome speeches and introductions, we set to work: one team went to lay bricks on one house, and the other went to lay the floor slab in another. Most of the work was just muscle: hauling and breaking rocks for the floor, mixing sand and cement with shovels, breaking up the ground with large hoes, shoveling dirt out in wheelbarrows, mixing clay mortar. There were “technicians” available for the slightly more skilled labor such as brick placement.

As we worked, I talked with the two Habitat team leaders and a few of the other Kenyan team members. Each of them thanked me multiple times for coming. They had been so disappointed when we had canceled our trip back in Feb (security issues), and some of the work had waited. These two homeowners had been waiting weeks for their houses, and with the help we gave them that day, they would be soon in their homes.

The kids worked hard and we accomplished the goals of the day: lay the slab in one house and put five rows of bricks on the other. And I left humbled. For me it was just a Saturday morning. For this village grandmother it was a home. The small things matter – the small ways we share of ourselves and our time may mean a lot to the one who receives them.

Running with one leg, biting with no teeth, digging with no hands = awkward as teaching with no voice:
I don’t know why my throat hurt. I wasn’t sick. At least I didn’t feel the other symptoms common to throat-related illnesses … no fever, drainage, stuffiness, headaches, etc. Just a very sore throat and a fast-disappearing voice. Finding a capable music substitute teacher is hard here. For me, taking sick days is to be avoided unless absolutely necessary – especially at this time of the year when it’s all concert-prep work. What to do? Get creative.

I attempted “silent rehearsals.” Technically, you don’t need a voice to teach choir. You just need good ears and a way to communicate. That method of communication may or may not be vocal. I tried the first silent rehearsal with the middle school choir – ironically, it was an amazing success. I wrote all the instructions on the board and did the rest with lips and hand-signals. It was a little like a game for them – what is Ms. Lillis trying to say now? I think I got lucky that day though. The next few semi-silent rehearsals did not work so well. The high school crowd was rather lethargic and not very motivated to pay attention when I tried it with them, and the 5th graders were too squirmy.

So, that to say, most of my teaching days these last two weeks have not been fun or encouraging. It’s hard to do your job when you’re missing then necessary tools. I’m happy to report though that my voice is now mostly back – no pain, and it feels about 90% stronger.

Kids are kids – everywhere: That brings us to this weekend. Very early Thursday morning, I boarded a plane to Mombassa with the high school band. The band teacher here at ISK had arranged a mini-tour for his kids – a chance to go down to the coast and play with/for two schools in Mombassa. He needed a female chaperon, so I agreed to go. It’s not a big band – only fifteen students – so it I knew it shouldn’t be too stressful.

The kids had a good time and played well of course, but that’s not the part of the weekend that got me thinking. As the chaperon with no teaching or leading responsibilities, I had plenty of time to sit back and observe. What did I notice? That kids are still kids the world over. It doesn’t matter where they are from or what language they are speaking, adolescent boys will still have short attention spans, will wrestle each other, and will want to nick their friend’s shoe for fun. High school groups that meet for the first time will still eye each other awkwardly. Teenage girls will still find creative ways to get the boys’ attention. Kids will always push the envelope somehow, someway. The bad kids may just up and shred it, but even the good kids will try to find the edges. On the second night, eleven of the fifteen kids found a way to push that envelope just a little too far. Consequence? Two-mile sunrise jog on the beach with Ms. Lillis.

One thought on “Bits of Life”