I’ve logged a few miles in the last two weeks.  A few miles and a few passport stamps.  (Good thing it’s up to date for the next nine years.  This time last year was a bit of a crazy scramble.)  Two and a half weeks ago I landed in South Africa … spring break or fall break, what you call it doesn’t matter – we had a week off school and I hightailed it south.  I got back to Nairobi late on a Saturday and had three days at home before leaving again.  Last Wednesday I took six choir students to Oman for a choir festival.  (Yes, the same one we went to last year.)  Got back on Sunday morning early AM and still haven’t done laundry from before the South Africa trip – the mountain of dirty stuff is growing in the corner of my room, but that’s a different story.

Life lessons.  I’m not particularly original or wise in any of these things, but a couple of experiences from these last three weeks have made an impression.

Sometimes it takes going a thousand miles to discover that what you have at home is good.

For the last three March breaks, I’ve mostly hung out in Nairobi with maybe a short excursion within driving distance.  This time though, I felt the need to get far, far away.  I thought too that I wanted to do something on the ocean – either dive or sail or discover an unexplored (by me) beach.  A South African friend of mine told me that the diving north of Durban is magnificent.  I asked around and a few others confirmed the suggestion.  So I booked it.  I flew down, rented a car, and drove up to the remote northern edge of South Africa – closer in fact to Mozambique and Swaziland than to any other big city in SA.  I stayed in a tent at the dive center where I had booked the four dives.  All four dives were great.  I learned a lot more about corals and I saw some fun stuff: moray eels, a blue spotted ray, sea turtles, a reef shark, dolphins, and lots of different fish including parrot fish, fire gobis, clown fish, scorpion fish, stone fish, potato bass, etc.  At the end of the day however, most of what I saw was essentially the same or similar to what I would see diving off the Kenyan coast.  It was lovely – stunning and beautiful – but not that different to what I could see at home.  It’s nice when you realize that what you already have is beautiful in its own right.

It’s not where in the world I am, but who I’m with that counts.

This has been a favorite saying of my mother’s since I was little.  It’s even one that I’ve already experienced multiple times.  Still … it’s a good one to keep relearning.  True things should keep showing up in life.  The week I was in South Africa, I spent the first half either alone or with people I met in transit.  Don’t get me wrong – meeting new people is great.  So is getting some quality alone time.  But that’s not what this thought is about.  Sharing time with people who are close to your heart is gold.  And when you are with people who matter, the where and the what are not so important.  The diving in Sodwana was great.  But it was not actually as great as spending three days with good friends in Cape Town.  We didn’t do anything especially out of the ordinary, but the time spent together was infinitely more meaningful and refreshing to me than anything else I did that week.

It’s a bitter-sweet feeling actually.  One part of me is so thankful for the wonderful people I have around me.  The other part deeply misses all the people I care about who are scattered across the globe.  Distance matters.  I like to pretend that it doesn’t, but it does.  When you are far away, you can’t breathe the air, smell the scents, or feel the dust and rain of a place.  You can talk about life, but you can’t really share life.  Everything is different when you live in different places – even the mundane things.  Standing in line at a grocery store is different.  The conversations you catch from people passing on the sidewalk, the sounds of your neighborhood, the rhythms of your neighbors – all these are different.  And discovering all of these is what I so enjoy doing when I go visit friends.  It’s what I love sharing when friends come visit me.  It’s life.  Big or little, mundane or exciting, ordinary or adventurous, it doesn’t matter what we do – when real life is shared, it’s beautiful and golden.

Here are some pics from South Africa.  Oddly enough, I didn’t get any pics of me together with Sean, Catherine, and Zeke in Cape Town.  Too busy enjoying the time to get a group picture I guess. 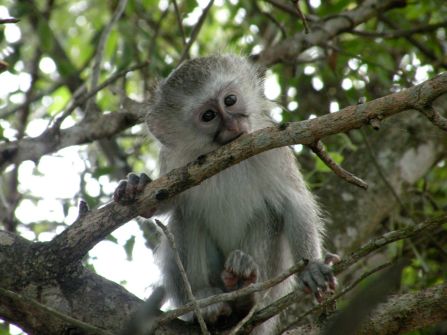 Have I mentioned before that I love monkeys?  I love monkeys!  Though, they are such naughty little critters.  Within hours of arriving at the dive camp, they managed to go into my tent and steal my granola bars off the night stand.  I was looking forward to those snacks!  This little baby in the tree was too cute. 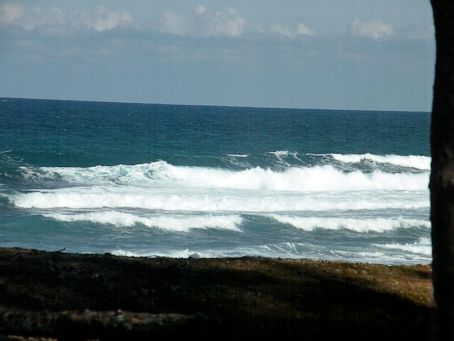 Sodwana Bay – where I went diving.  I don’t have any underwater pics because I’m just not that high-tech yet.

Zeke took me walking along the pier in Hout Bay.  Sea gulls everywhere.  “Mine! Mine! Mine!”  (Thanks Kaitlin for showing me that trick with raising the arms to make them all fly.  I used it on this trip and we had some good fun stirring up gulls.)

Does this look like a seal’s head to anyone else? 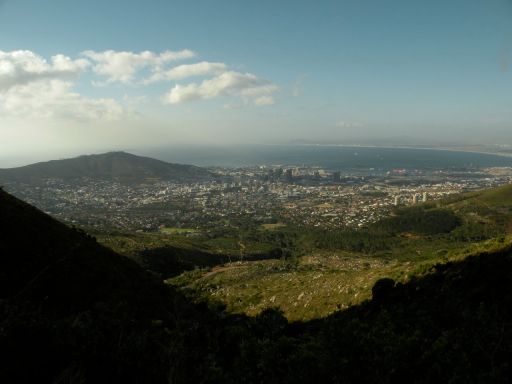 A view of Cape Town city center from part-way up Table Mountain.