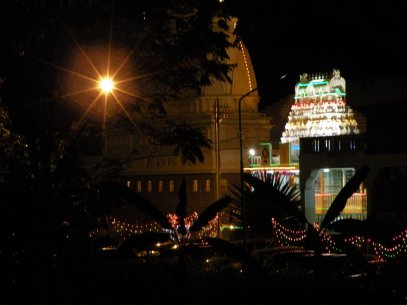 I live next to a large Hindu temple. Back in July, when I first moved in, I thought: “Yes! It’s not a mosque – they will be quiet neighbors.” I am slightly ashamed to admit how radically uninformed I was about temple life. The last nine nights have been hoppin’. Bright lights outline the buildings and cars line the street in front of my gate. Over the loudspeakers, I hear several kinds of music and chant. Occasionally there has been cheering. Most evenings the party starts around 7pm and ends between 11pm and midnight.

While I am not yet sure of the significance of each of the festivals, I know that the week began with a the celebration called Navaratri and ends with tonight’s event called Dusserah. That’s not to say however that things quiet down by tomorrow. I took a minute to check the Hindu calendar online and apparently the temple is “party central” in October. There are at least ten more festivals slated between now and the 31st. Some of them may begin one day but run over several. Dwali – the most well known in the West – will culminate on the 28th. So, while I may not get much sleep this month, I will likely have a few more firework photo opps.