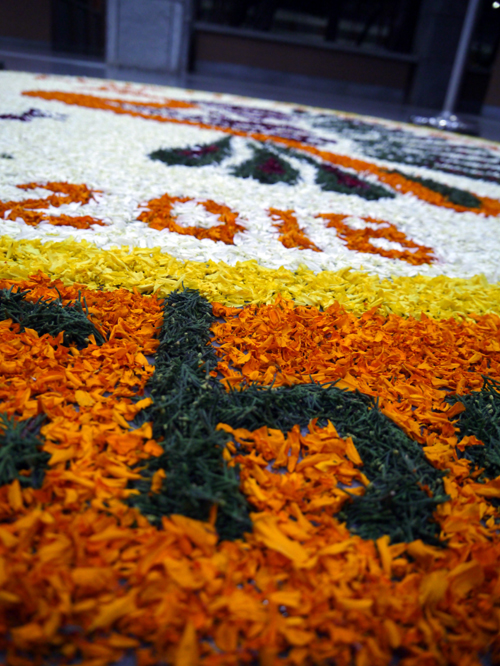 India: the most familiar place I had never been.  Three weeks ago, I took a group of middle school students to an AMIS Honor Choir festival hosted by the American International School of Chennai.  We left on a Tuesday and landed on a Wednesday morning.  In the 45-minute ride from the airport to the school through work-day traffic, I had the strangest sensations – not quite deja-vu, but not quite new.  This was strangely familiar.  Hawkers, beggars, street vendors; whole families stacked on mopeds, children hanging from the backs of busses; five lanes in three, crawling traffic, gridlock, every kind of horn sounding “don’t hit me”; political graffiti, generations of posters and paint peeling from walls, electrical wires strung like abandoned spider webs; the scent of dust and diesel, flowers and spice, with the faint hint of ocean on the air;  half-finished buildings melting back to earth between modern and ancient temples, opulence suspended on a sea of want – I have seen all of this before.  Though the language, people, colors, and flavors were all new and unique, pieces of the place reminded me of Congo and Kenya and Morocco all thrown together and jumbled up in a new way.

Travel is powerful.  There is nothing quite like it for refreshing the mind.  Throw yourself into the throng, sit where you can feel the ebb and flow of humanity, and see how your perspective changes.  I feel vibrant and alive when I travel.  The students had a great time, of course, rehearsing and performing the final concert.  They learned and grew, and it was fun for me to watch that happen.  More than that though, it was good for me to connect with kind colleagues, to feel and see a new place, to help with the event and send updates back to parents.  It was good to forget for a few days that cancer is still happening. 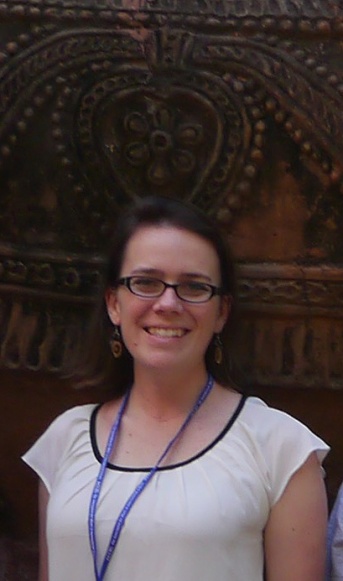 I was standing with my students … but I’m not allowed to post their pictures. So you get just me! 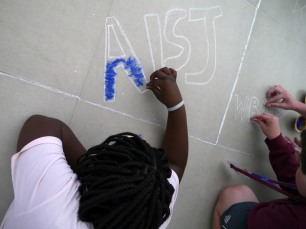 Students got to play with the colored sand used in kollum designs.

Final concert.
Yes, cancer is still happening.  I knew from the pre-trip biopsy that there are still some lymph nodes with cancer left in them.  But what kind?  Had it spread anywhere else?  These last two weeks have been something of a roller coaster.  As soon as I landed back in South Africa, besides dealing with jet-lag and school, I faced a follow-up session with the nuclear medicine department.  A new round of radiation scans would help the doctors know if it had spread any further, and to what extent.  The scans required preparation: two injections of thyrogen to stimulate my TSH levels, plus a low dose of radioactive iodine.  I went in for scans 24 and 48 hours after the iodine.  Both scans came up clean.  The lab technician compared my current scans with the ones from August — fascinating! — and there was no apparent uptake of the iodine this time.  I wasn’t sure at first what this meant.  It sounded like good news.  I was certainly delighted that I didn’t have to spend another three days glowing in a lead room.  But, did this mean that all the thyroid tissue was truly gone?  If so, then what kind of cancer is hiding out in those lymph nodes?  How do we know that it hasn’t drastically changed forms and spread in a different way?  These were the questions I carried with me into last weekend.

On Monday of this week I met with my surgeon to discuss all the various test results: blood work, ultrasounds, biopsy, radiation scans, etc.  In short, he believes that:

Most of me is profoundly relieved.  I am so thankful that the cancer does not appear to have changed forms or spread beyond my neck.  I am thankful I don’t need more radiation or any other kind of cancer treatment.  I am thankful that surgery appears to be the best way forward.  I’ve been there — I can do that.  As my brother always used to say when we were kids playing Nintendo: “If you beat it once, you can beat it again.”  At the same time, a small part of me groans at the thought of repeating the same surgery on the other side of my neck.  I remember the healing steps: the trouble sleeping, bathing, and moving; the drainage bag, the months of numbness and tingles, the physiotherapy, the tension when singing (even now).  When these thoughts make me sigh, I have to remind myself that it won’t be exactly the same as the first time.  The surgery itself shouldn’t take so long since there is much less tissue to remove.  I won’t have to become hypothyroid (I can keep taking my meds), so my brain should be clearer and I should have more energy in the post-op process.  I have an idea of what I’m in for, and that in itself is useful.

The surgeon and I compared calendars and scheduled it for March 19th.  Not quite how I was hoping to spend my March break … I would much rather go soak up saltwater somewhere blue and beautiful.  Even so, we do now what we must so that we can do later what we may.  I am calm and hopeful.  Though there is valley yet to walk, I believe there are good changes ahead.

3 thoughts on “The Familiar Unknown”