I’m feeling quite unpoetic these days, so I don’t think this post will be particularly captivating. Still, it’s been ages since I’ve made the effort, so it’s about time to articulate.

The most recent and most relevant event in my world was the musical production “Once Upon A Mattress.” This year’s musical was a big event. A cast and crew of about 35 kids, lots of music, late rehearsals, rotating turrets, crazy costumes, last minute alterations, water effects, and about a thousand tickets sold for three days of show. My main job on this production was to pull the musical side together. I volunteered in other ways though too. Like set painting. I picked up a brush a couple times and filled in some bricks as a stress reliever. There’s something therapeutic about painting.

Here’s me getting a little of that paint therapy: 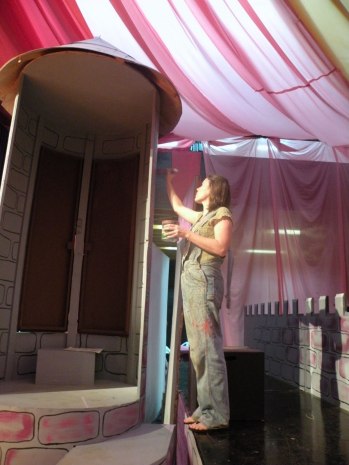 Here’s an attempted artsy shot I took while making props. 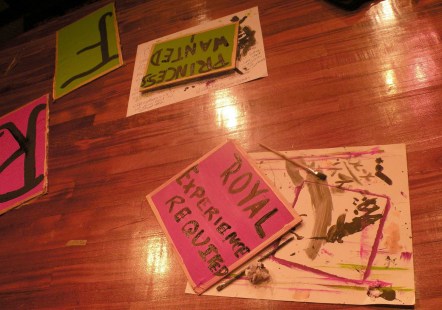 And here’s a shot of the stage. It doesn’t show the whole stage, but like I said, there are rotating turrets involved. The top of the stage (which you can’t see in this pic) was dressed in these massive sheets of pink, red, and gold cloth so that the whole thing looked like a massive canopy bed. 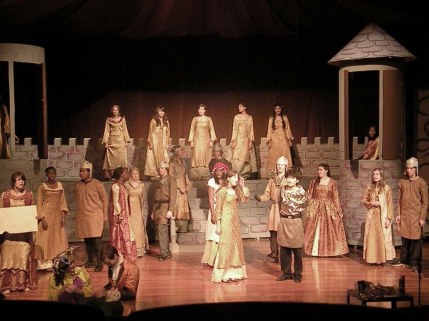 As usual, the kids did a great job and had a lot of fun in spite of the various levels of stress. As for me, I’m readjusting to having my afternoons back. It’s kinda nice to get home while the sun is still up.

Next up is the normal end-of-semester run of concerts. The first one is the HS holiday concert next Wednesday night. After that, the middle school will have their concert on the 8th. And then at the very very end, the elementary kids will have their concert on the 16th. And then it’s break time! In between and around those three concerts will be a variety of other events: the Habitat Gala Dinner, the Intercultural Trip planning trip and training sessions, Thanksgiving dinner with friends, and Nairobi Chamber Chorus concerts. This Saturday I’ll probably go see the Nairobi Orchestra concert. Tomorrow is International Day at school – there will be a parade and food festival for that.

That’s the latest from the highlands. Hopefully I’ll get some poetic inspiration soon.

2 thoughts on “drama of a musical sort”